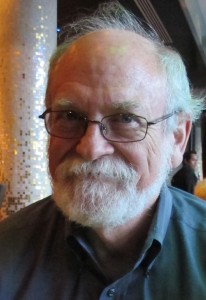 Robert Mahony has been a member of the Eighteenth-Century Ireland Society (intermittently) since 1986. He was Professor of English at the Catholic University of America and is now retired. His research focus is Jonathan Swift.

Favourite archive:
Mainly archives in Dublin or London, sometimes the Library of Congress and the Folger Library, Washington.

Favourite museum, gallery or heritage site:
My favourite museum, or at least the one I keep going back to, is the Freer Gallery in Washington DC, which features J.M. Whistler’s “Peacock Room” (an actual dining room rather than a painting so named); next favourite is probably the Geffrye Museum in London.

Most exciting place or time in the eighteenth-century:
The field at Culloden, while Jacobitism still had a chance.

Best online resource:
I can’t say much about online research or archives, as I prefer to work in real libraries.

Best book/history of 18th century interest:
A book I keep going back to is Walter Jackson Bate’s The Burden of the Past and the English Poet; but more specifically “on” the 18th century it’s Claude Rawson’s Gulliver and the Gentle Reader, which has had an enduring influence on my perspective on Swift.

What eighteenth century figure would you most like to have a drink with:
I’ve never really thought about having a drink with Swift, or with other people whose works I’ve studied – I’m not being flippant, but actually never have thought in those terms (most of the writers I’ve studied don’t seem to have been the sorts of people I’d socialise with – certainly not Swift!).

What’s so great about the eighteenth-century?
I became attracted to the 18th century by falling in love with Pope’s poetry while in secondary school, but my research interests were initially centred on William Collins (who tried to reconnect with Milton by bypassing Pope, which was the wrong way, though his experiments are fascinating) and then Christopher Smart (often yoked with Collins as an 18th century ‘mad poet’, and who is still astonishing in terms of the effect of religion on temperament); I finally wearied of explaining who I was working on, and went back to Swift, one of the subjects of my early research. Since then, when I say I am working on Swift, at least everybody has heard of Gulliver, usually among the Lilliputians, but that will do for cocktail conversation.