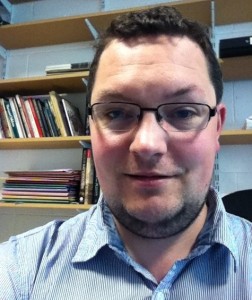 Patrick Walsh is Reviews Editor of Eighteenth-Century Ireland/Iris an dá chultúr and an Irish Research Council CARA Postdoctoral Research Fellow based at the School of History and Archives, UCD. His research looks at Irish economic, social and political history in the long eighteenth century. He is currently writing a book on state and society in eighteenth-century Ireland, having recently completed a monograph on Ireland and the South Sea Bubble. To find out more, you can follow Patrick (@speakerconolly) on twitter or take a look at his UCD staff page.

Favourite archive:
I have two! In Dublin I love the friendly helpful Irish Architectural Archive, where I did much of the research fopr my PhD thesis. The UK National Archives at Kew, what a colleague calls the ‘mothership’ is all that a good national archive should be and is a huge favourite and inspiration.

Favourite museum, gallery or heritage site:
I may be biased but I will say the magificently restored Castletown House, Co. Kildare.

Most exciting place or time in the eighteenth-century:
I would love to have experienced the coffee shops, parliamentary galleries and corridors of power and intrigue of Swift and William Conolly’s Dublin in the 1720s.

Best book/history of 18th century interest:
This is a tricky one, and I suspect my answer will have changed by the time this is published. The recent books have sparked off most ideas for me have been David Dickson’s masterful Old World Colony and Padraig Higgins quite superb A Nation of Politicians: Gender, Politics and Pyriotism and Political Culture in late Eighteenth-Century Ireland (2010).

What eighteenth century figure would you most like to have a drink with:
I suspect a night out on the town, whether in Belfast, Dublin or Paris with Theobald Wolfe Tone would be great fun, provided he wasn’t recording it all in his diary!

What’s so great about the eighteenth-century?
Wow, this is a tricky one. Like today it was an age of contrasts, a penal era or a golden age, an age of enlightenment or an age revolution, a place and time that was both very similar to now and yet also very strange. All of these encourage me to become a historian of this period. The possibilities offered by such big themes and the opportunity to go beyond the often glorious façade make it a great century to work on. For me, however, it is the variety of sources that make it so appealing; from polemical pamphlets, to Georgian houses, to official papers, a wealth of newspapers and private correspondence, they have all featured in my work. As a researcher the manageable amount of sources and the great gaps that remain in our knowledge, combined with the convivial and welcoming attitude of other scholars from all disciplines, make it an extremely pleasant and exciting place to work. Long may that continue!

What’s so great about being part of ECIS?
I first joined ECIS while a graduate student in 2004, after attending my first annual conference in Trinity College, and wrote my first review for the journal a year later. The Society’s journal also gave me, like so many younger scholars, the opportunity to publish my first peer-reviewed article in 2006. In 2010-11 I co-edited a special issue of the journal on The Penal Laws, and in 2011, I was elected as reviews editor, a position I continue to hold. This position allows me to see the wide variety of works on eighteenth-century Ireland every year (an ever increasing number on a sometimes bewildering array of topics), and to choose who gets to review them. Then comes the fun part of finding and chasing reviewers, though this is never difficult thanks to the interest shown by so many members of our society.