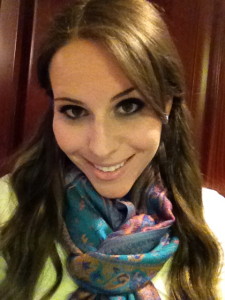 Heather McKendry is a PhD candidate at McMaster University. Her research interests include Restoration and eighteenth-century literature, prostitute narratives, representations of epidemics and venereal disease, economic history and crime writing. Heather is a new member of the Eighteenth-Century Ireland Society and will be speaking at the 2014 Annual Conference in Armagh.  For further information, visit her website https://mcmaster.academia.edu/HeatherMcKendry/.

Most exciting place or time in the eighteenth-century:
1720, as the bubble burst (the madness!)

What eighteenth century figure would you most like to have a drink with:
Samuel Johnson – but I’m no Hester Thrale…

What’s so great about the eighteenth-century?
Its paradoxical combination of earnestness and facetiousness.

What will you be talking about at the ECIS Annual Conference 2014?
I will be looking closely at Swift’s terrifyingly ‘beautiful’ nymph, Corrina. Through a bio-economic lens, I will explore how Swift’s treatment of the syphilitic prostitute is distinct from his scatological approach to the ladies of his dressing room poems. Corinna’s venereal diseased body, I will argue, encompasses a number of Swift’s anxieties about the Irish economic climate in the 1720s and 1730s. It is because of this, I propose, that his response is not simply satirical but violently punitive—directed at financial crime rather than filth.