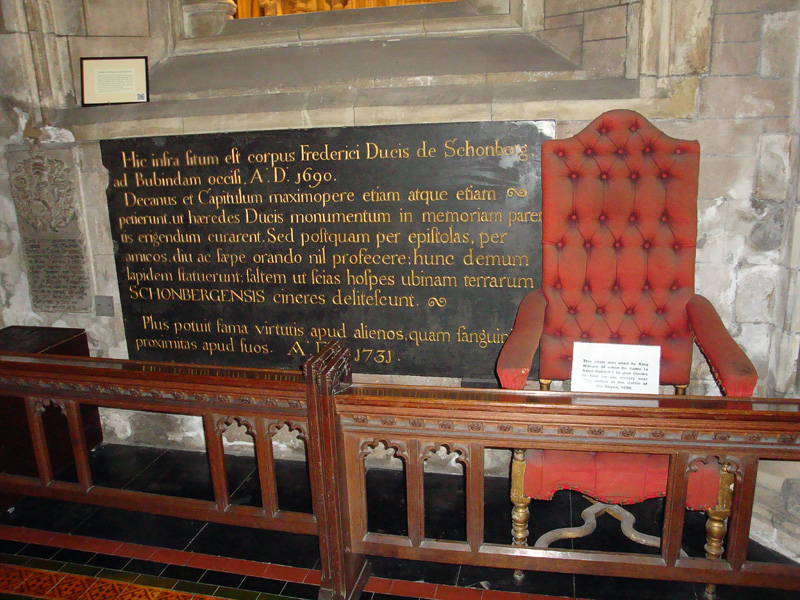 If you go to St Patrick’s Cathedral today, you can see the very chair William III sat on during the thanksgiving service.

Now, I think this artefact is very interesting, but the students that I accompanied to St Patrick’s the day I took the photo above were not at all convinced. So, to provide more insight into William III’s visit to St Patrick’s Cathedral, and to better explain why this chair is so very interesting, I’ve put together a few accounts of events of 6 July 1690 from resources that I have found online.

The London Gazette of 10-14 July 1690, using letters from the the Williamite camp at Finglas as a source, provided the following account of the thanksgiving:

This day, being Sunday, His Majesty rode in great Splendor to the Cathedral at Dublin, where all the Services of the Church were solemnly performed. The Bishops of Meath and Limerick were there, and Dr. King preached an excellent Sermon. The old Mayor and Aldermen attended his Majesty, and the People received him with great Acclamations, and with all the Demonstrations they were able to express of the sense they have of their great and happy Deliverance.  The King returned by the Castle, and rode in to see the place, but did not alight.

You can access pdf copies of the London, Edinburgh and Belfast Gazettes at https://www.thegazette.co.uk/. By way of background, the ‘Dr. King’ mentioned in the report was William King, later archbishop of Dublin. The bishop of Meath was Anthony Dopping, and the bishop of Limerick was Simon Digby.

You can also find an account of the day’s events in a very useful secondary source, Richard Mant’s History of the Church of Ireland, vol. i (London, 1840), which is available to download in various formats from The Internet Archive, here.

On the following Sunday, July the 6th, bishop of Meath, and Digby, bishop of Limerick, with all the clergy who were in Dublin and its neighbourhood, the Primate having excused his non-appearance by reason of his great age and infirmities, attended his [William III’s] triumphant procession to St Patrick’s cathedral, wither he repaired to return thanks for his success. There a sermon was preached by Dr. King, who had been elected not long before to the deanery, commemorating the power, and wisdom, and the providence of God, in the protection of his people, and the defeat of their enemies.

The second volume of Mant’s History is also available from The Internet Archive.

And finally, if you are interested in a Jacobite account of events, take a look at  A Jacobite narrative of the war in Ireland edited by J.T. Gilbert which is available from University College Cork’s wonderful Corpus of Electronic Texts (CELT) resource. In this account, the author describes events in the immediate aftermath of James II’s defeat at the Boyne as follows:

The next morning of the skirmish at the Boyne, the prince of Orange sent brigadier La Melloniere, with a thousand horse and dragoons, and a body of foot with eight pieces of cannon, to summon Drogheda, wherein there was thirteen hundred Irish soldiers, and the lord Iveagh, governor thereof, who surrendered the town, on condition that the garrison should march to Athlone without arms. This was a poor defence of a town that gave work enough to Oliver Cromwell to take it in the year 1649. On the fourth day of July, the prince of Orange sent the duke of Ormonde and monsieur d’Overkirke to Dublin with nine troops of horse, to secure the tranquillity of the city. On the fifth he marched his army to Finglas, a pretty village within two miles of Dublin, where he encamped. On the sixth, being Sunday, he made his entry into that city, being attended only by a few of his great officers, and went to the cathedral church to hear a sermon.

So, if you happen to be in St Patrick’s Cathedral any time soon, I hope you take a moment to appreciate what momentous events this chair was a part of!

Finally, if you are interested in learning more about the Battle of the Boyne, you should visit The Irish Story blog and listen the podcast of Padraig Lenihan discussing the event.