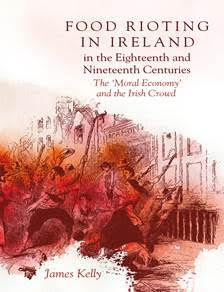 The launch of Prof. James Kelly’s new book Food Rioting in Ireland in the Eighteenth and Nineteenth Centuries: The ‘Moral Economy’ and the Irish Crowd will take place in the Royal Irish Academy, Dawson Street, Dublin 2 from 6.00 pm to 8.00 pm on Thursday 30 November 2017.

Food rioting, one of the most studied manifestations of purposeful protest internationally, was practised in Ireland for a century and a half between the early eighteenth century and 1860. This book provides a fully documented account of this phenomenon, and seeks to lay the foundations for a more structured analysis of popular protest during a period when riotous behaviour was normative. Though the study challenges E.P. Thompson’s influential contention that there was no ‘moral economy’ in Ireland because Ireland did not provide the populace with the ‘political space’ in which they could bring pressure to bear on the elite, its primary achievement is, by demonstrating the enduring character of food rioting, to move the crowd from the periphery to the centre. In the process, it offers a rereading of eighteenth- and early nineteenth-century Irish history, and of the public response to the Great Famine.

RSVP (acceptance only) Four Courts Press | [email protected]
If you are unable to attend the launch but would still like to purchase a copy
of this book, please contact Four Courts Press directly at 01 453 4668.

To learn more about this book, visit the Four Courts Press website at
http://www.fourcourtspress.ie/books/2017/food-rioting-in-ireland/