I was in Philadelphia over the summer and I noticed that there are many monuments to Benjamin Franklin in the city. One in particular, located opposite the Masonic Temple at 1 North Broad Street, caught my attention. It was designed by Joseph Brown and, as you can see below, shows Franklin at work at his printing press. 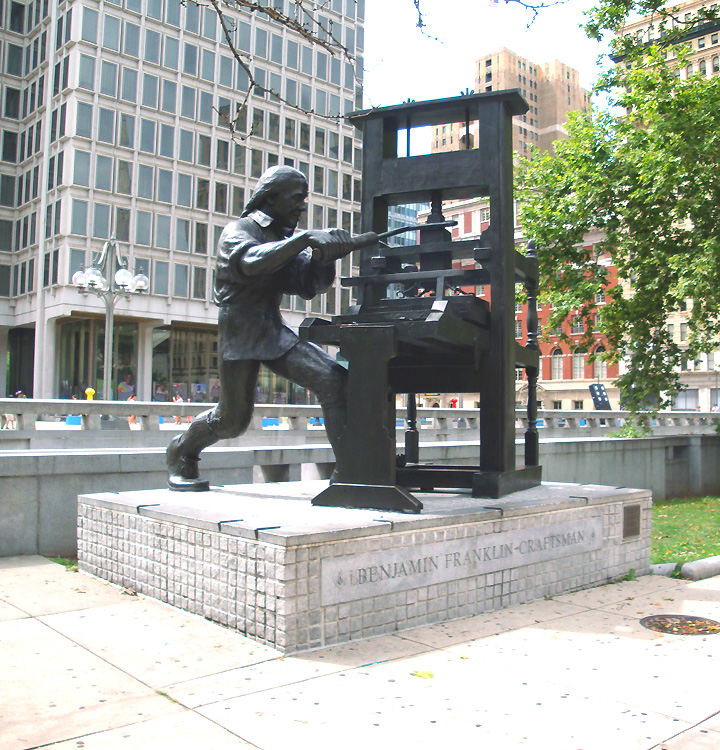 At the age of twelve Benjamin Franklin had signed an indenture to serve an apprenticeship to his older brother, James, a printer in Boston and publisher of the New England Courant. During his apprenticeship, Franklin submitted a series of essays to the Courant under the pseudonym Silence Dogood. You can read some of these essays on the Massachusetts Historical Society website, here.

At the age of sixteen, Franklin had been responsible for publishing the Courant for a period of three weeks while his brother was imprisoned for libel. In early 1723, when his brother was prohibited from publishing the paper altogether, it appeared under Benjamin Franklin’s name. Later the same year, with four years left to his apprenticeship, Franklin ran away.

He went on to work in print shops in Philadelphia and London. In 1728, he established a print shop in Philadelphia in partnership with James Meredith. In terms of his work as a printer, Franklin is particularly noted for publishing the Pennsylvania Gazette and Poor Richard’s Almanack.

While he lived in Philadelphia his home was located off Market Street in an area now known as Franklin Court. Although the original buildings were demolished in 1812, steel ‘ghost structures’ outline where Franklin’s house and print shop once stood. 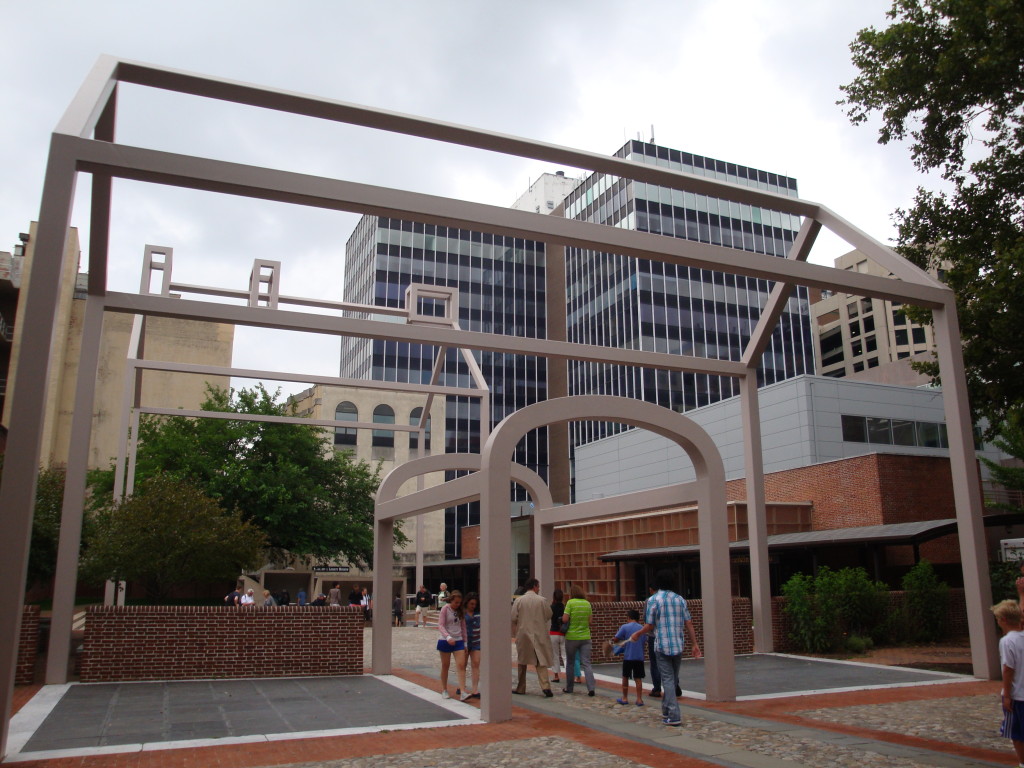 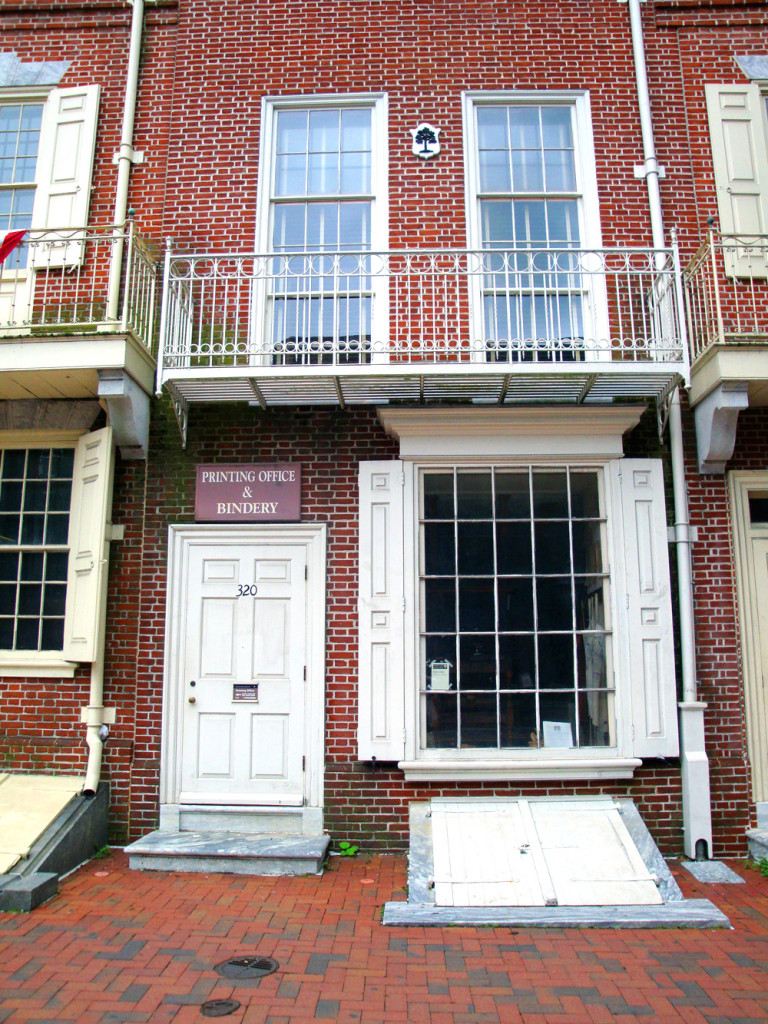 Staff provide demonstrations of the printing process using the replica wooden presses pictured below. You can view a demonstration, here. 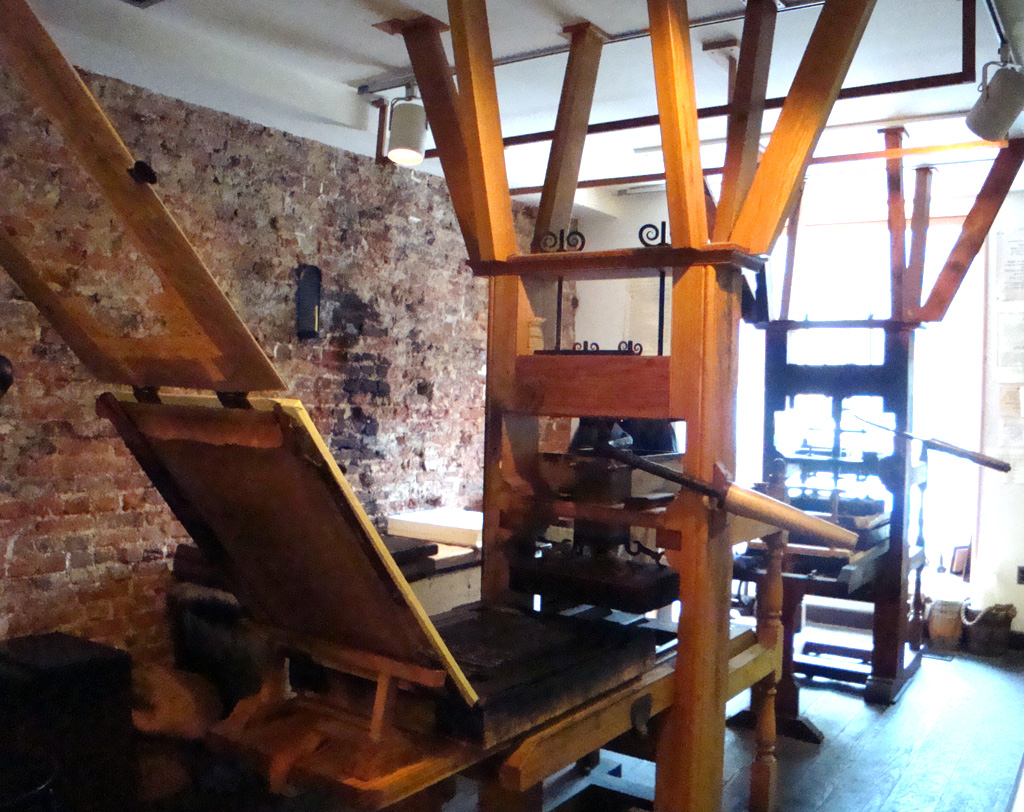 Wooden presses of this kind were used in America and Europe up to the late eighteenth century, at which time more efficient and durable iron presses were introduced. From the early nineteenth-century printing technology developed rapidly, as improvements were made to weighting and leverage mechanisms, and steam power was introduced.

I’m not sure if any wooden printing presses survive from eighteenth-century Ireland, however there is a replica press on display at the National Print Museum.

If you would like to know more about Benjamin Franklin, there is a wonderful online exhibition on the Library of Congress website, here. The ‘Printer and Writer’ section of the exhibition shows samples of some of Franklin’s finest work as a printer, including his noted 1744 edition of Cicero’s Cato Major.